Overview
As part of an assistive technology class, we were paired with Annette, who is deaf, as the co-designer and client for our team. She’s often had difficulty noticing emergency vehicles approaching when they were not in her immediate range of vision. We wanted to create a way to detect and notify her of nearby approaching sirens, in order for her to safely and quickly respond.
‍
Roles
Product Designer 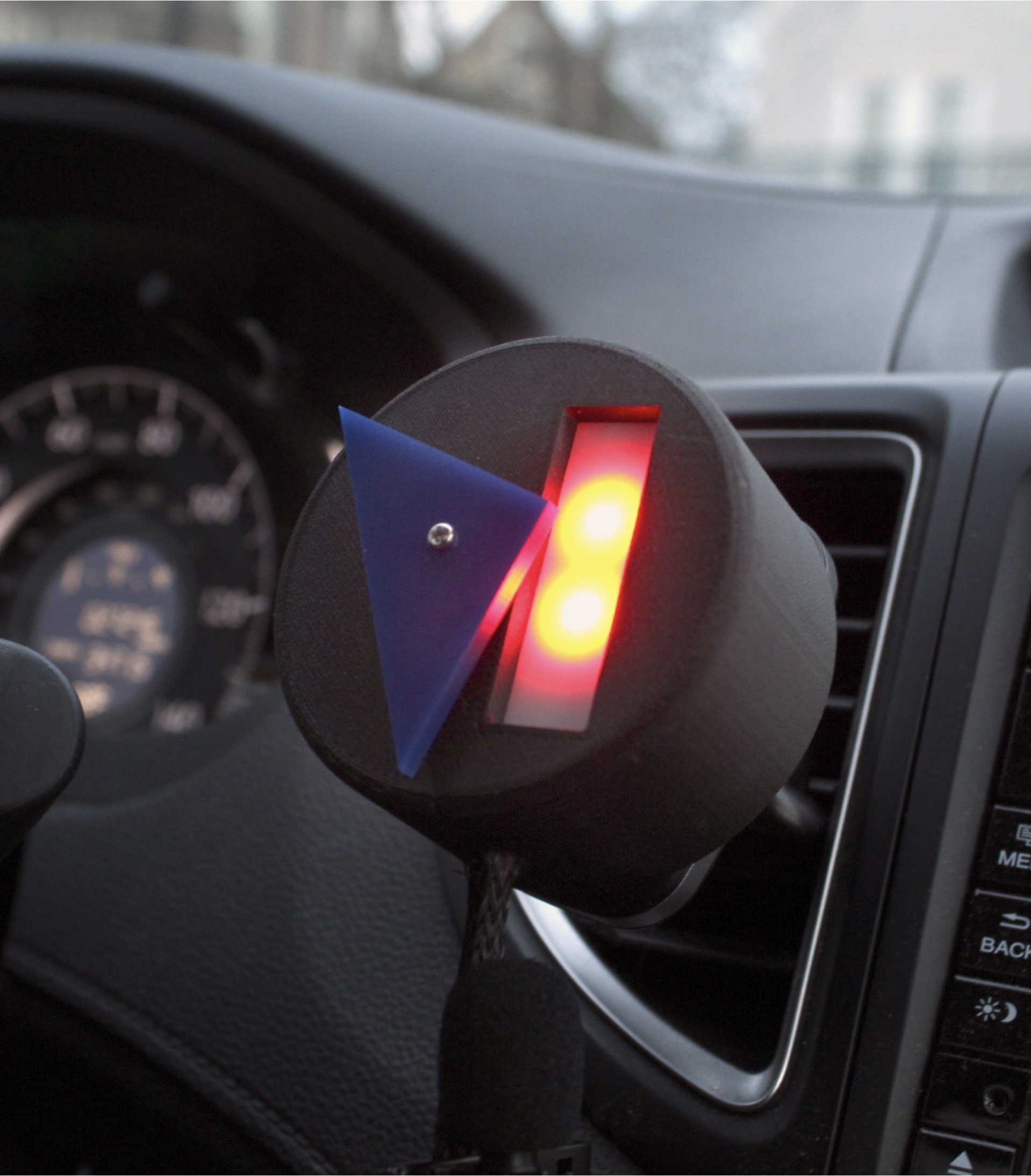 PROBLEM
While driving, Annette’s not able to hear sirens and know when to move her vehicle out of the way. This has led to multiple potentially dangerous situations for her and encounters with angry commuters.
Research Insights
While researching other assistive hearing solutions used by Annette, we discovered through interviews with her that:
Design Requirements
Based on our research, the solution needed to have these design requirements: 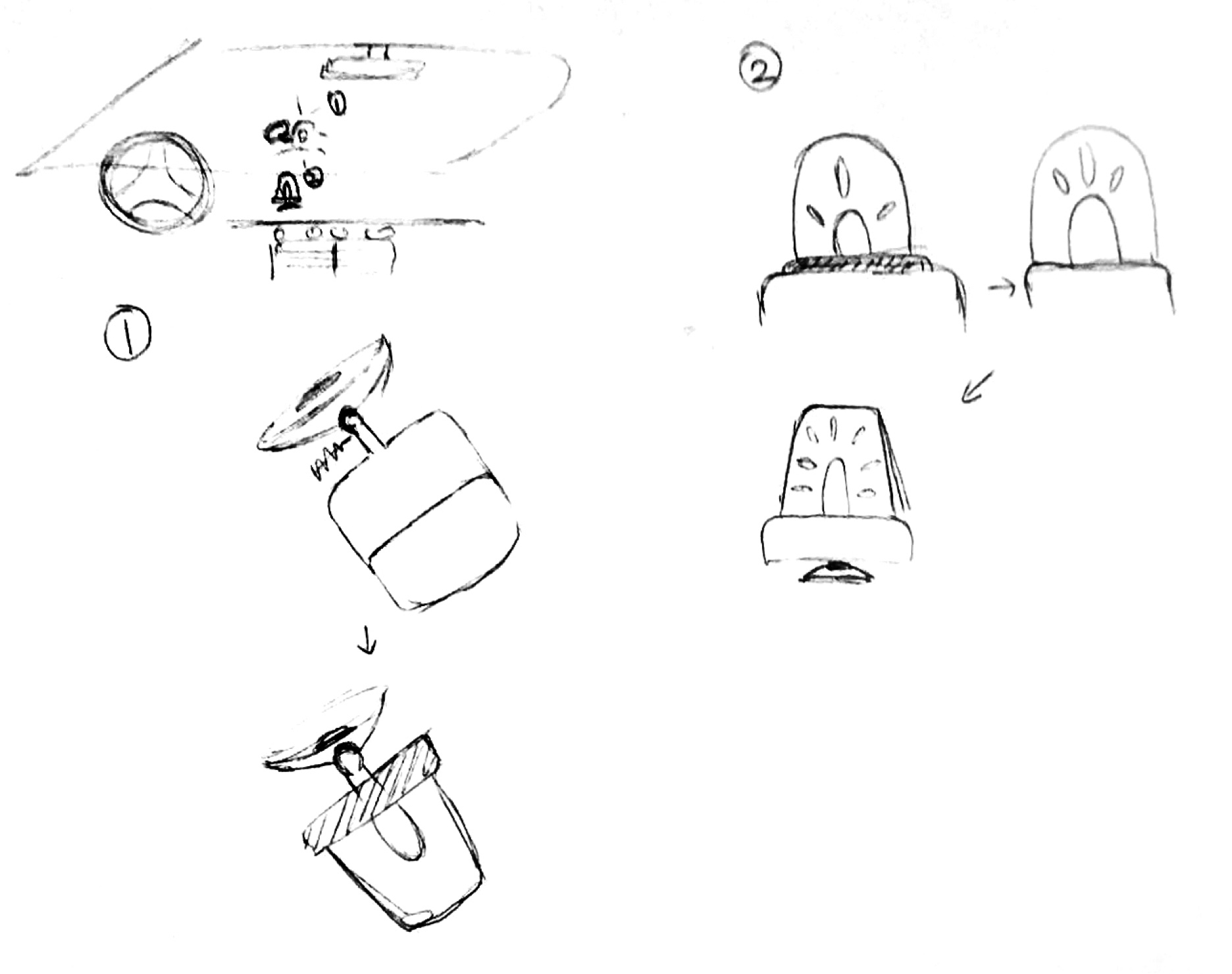 Initial Prototypes
We created several prototypes to test out various notification mechanisms, light or motion, and various form factors. Our initial prototype was made out of foam core with an opaque panel panel in the middle, to mitigate distracting bright lights, and suction cup attachment mechanism. We tested LED light colors as well as different pulse rates by driving around with Annette and activating the prototype at random times with a force sensor. Although there was not a significant difference in response time for the different pulse rate, the red LEDs did have significantly lower response times.
‍
Before we even began our first round of user testing, however, we quickly realized that the sunlight created lighting conditions that washed out the LED lights. In addition, the device had to be in the dashboard area near the window but, the suction cup attachment mechanism did not adhere well to the dashboard.

Me testing in the bright sunlight with our makeshift canopy

DESIGN ITERATION
To address the lighting problem encountered, a “hood” of sorts was designed to provide shade over the LED panel, but we expected the unpredictability with sunlight angles to diminish its effectiveness.

Another notification method that we’d previously tested was motion with a motor and a bright red flag. We conducted the tests at dusk so that the two different notification methods of light and movement could be compared under both the lighting conditions of night and day.

Interaction and Form
The resulting response times led us to conclude that combining the two into one notification system would lead to a solution with the most flexibility in different lighting conditions. Proceeding with the rounded form that Annette liked, we integrated  geometric shapes that were Bauhaus inspired, to blend in with her minimalistic car and style. 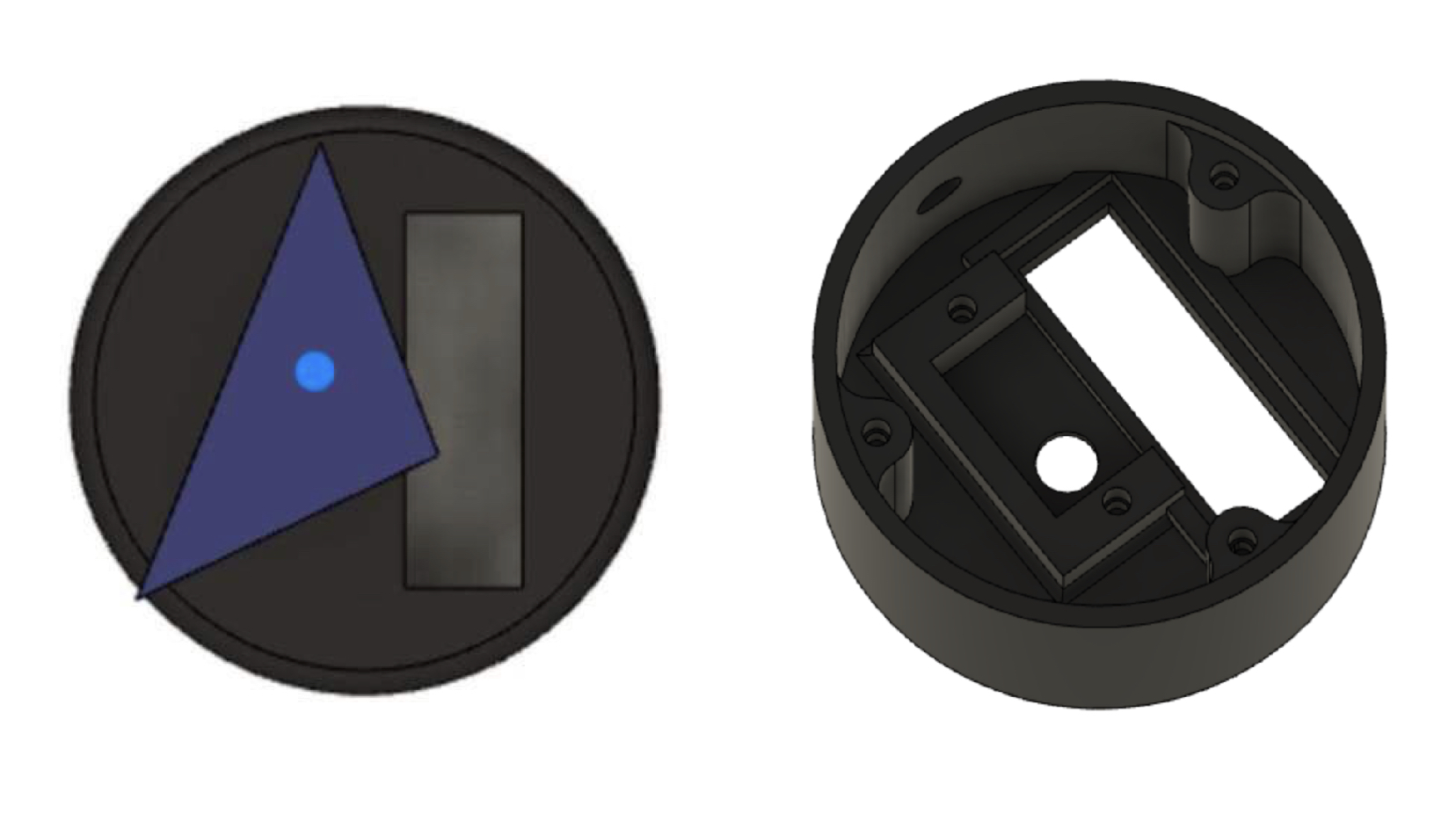 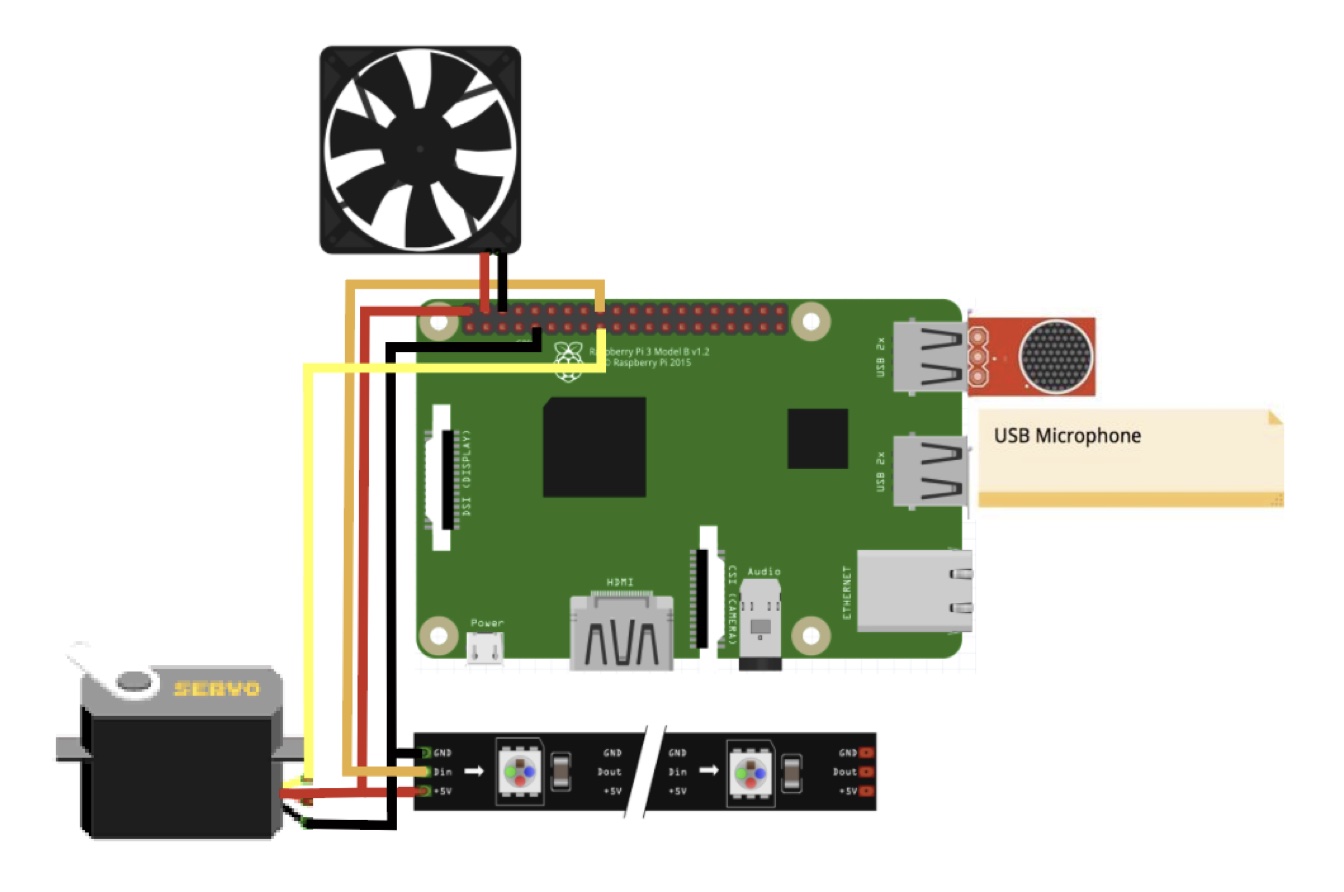 Final Prototype
Our final prototype integrated both notification interactions as well a magnet attachment mechanism that mounted to air vent with an adjustable mounting angle. Annette had expressed a desire for a smaller device which I was able to accomplish that by moving the main electronics to an external case that would rest in her center console compartment. 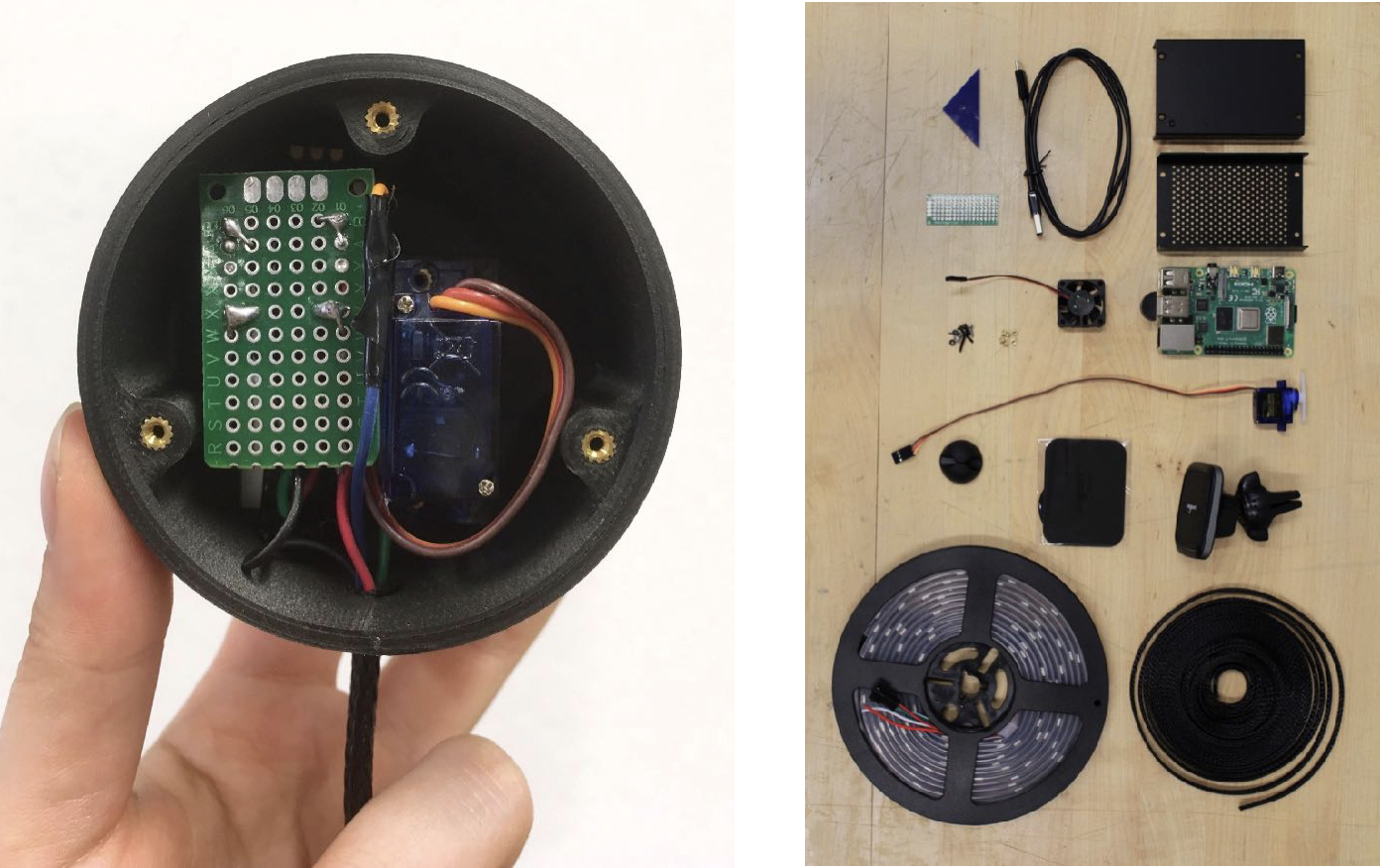 DEVICE INTEGRATION
The final product ended up being one third the size of the initial prototype and works in all lighting conditions. The USB plug that goes in the center console ensure that’s the device starts up automatically when the car does. The black finish allows it to blend in with the dashboard, while the external microphone and processing unit allow the device to remain slim. We also added in external cord management through clips and sheathing to minimize distraction to Annette. 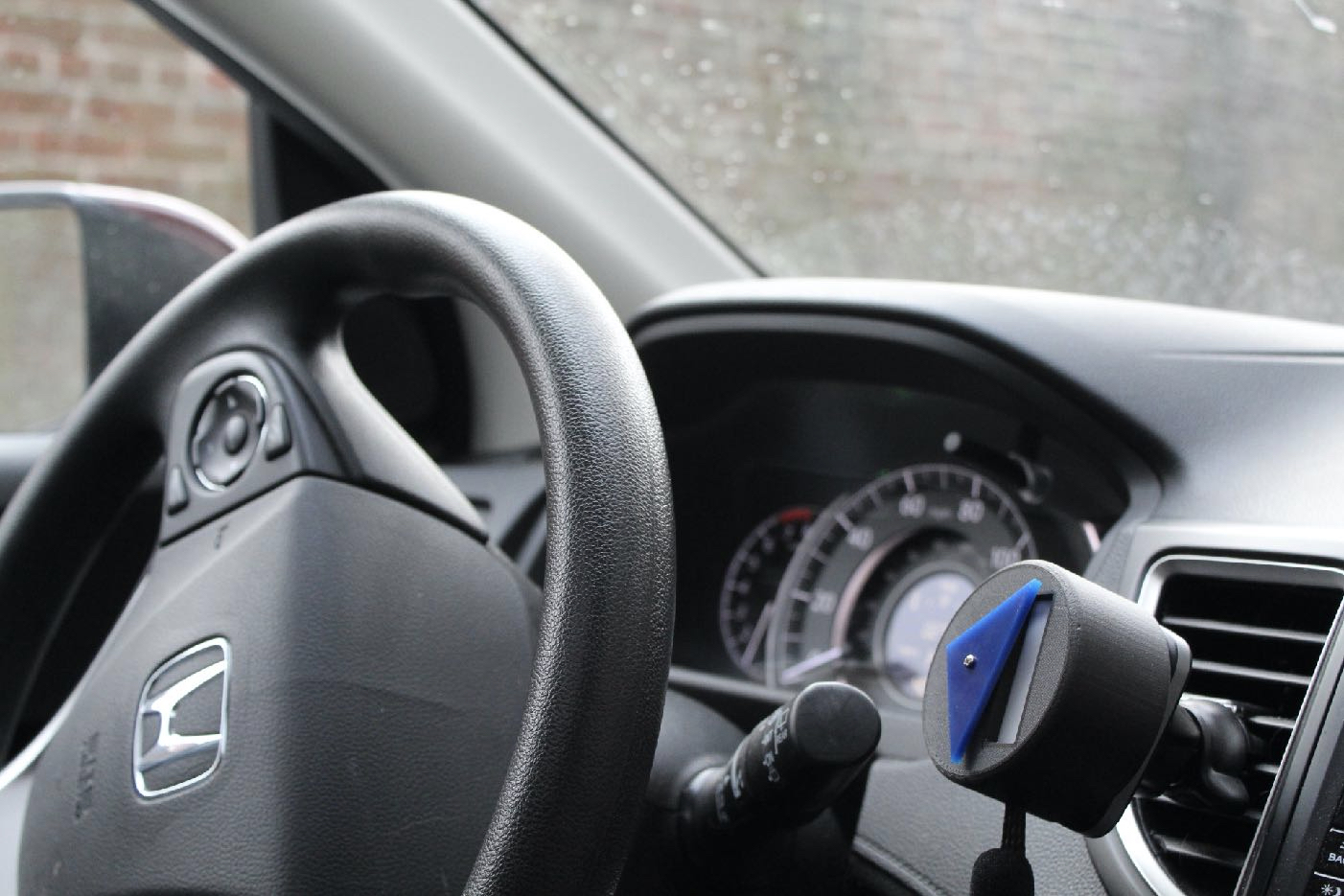 Attaching the detector to the vent through a magnetic phone stand

Performance
The audio detection was done using a machine learning algorithm trained on a library of siren sounds by one of the computer scientists and is able to process sound continuously in less than 3 seconds. Testing was done using online recordings of a variety of siren sounds (as it would have been potentially dangerous to stimulate actual siren noises, or purposefully time them), and Annette was able to successfully react to a majority of the detections.
Reflection
Getting to work with Annette and her dog Fiona was a wonderful experience and has made this one of my favorite design projects. It was invaluable to get immediate feedback and develop such a close relationship with a co-designer. The team was also one of the best that I worked with as everyone did their role well and helped out with our strengths and supported each others weaknesses.
‍
An aspect of the project that I would like to improve upon in the future is to do more testing and validation for the devices. Due to lack of time, we were unable to test with active sirens, but more robust tests embedded with Annette’s everyday driving would have been helpful.

PPAT was an amazing class that taught me so much about the world of assistive technology. Being immersed in one project throughout the semester allowed us to thoughtfully evaluate every aspect and decision that went into our solution.
Home